Volunteer In Cebu & And The Death Of A Hero

Volunteer In Cebu & And The Death Of A Hero 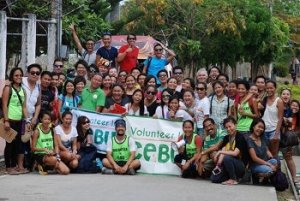 Ok, with this message I want to tell you about a GREAT charity: “Volunteer in Cebu” and honour a warm and gentle person that unfortunately left this world in a “heroes death” on Mount Kinabalu in Malaysia.

Last month in Cebu I joined what is called a “feeding”. A feeding is when you go to an area where there is a lot of poverty and you provide the people with a decent nutritious meal.

I personally do not like the term feeding. One feeds animals. But I was not able to come up with a good alternative.

You have any ideas?
(the winner gets a white and blue Dutch windmill, that can be picked up in every guest family around the world that ever hosted Dutch foreign exchange students).

It turned into a pleasant day with Cebu city folks and tourists mixing with people “in tha hood”. Fun and games. The goal is to give poor people a good day AND have them go home full and happy.

Volunteer in Cebu gets as much people as possible involved in volunteering work. It is working pretty well, because we are with a bus full.

All in all you have to admire the project and all the work that goes into it.

Btw, the driving force behind the project is called Jilly. She is sort of the mama san of Cebu. She arranges everything from salsa nights to booze cruises and couch surfing events.

Because when you teach a man how to fish he will soon be able to use his boat to tow bananas filled with tourists around previously pristine islands.

…The real change they are bringing somewhere else…

They have -one project- where they literary take children of the street and feed them for 60 days. These children are often suffering from serious malnutrition. This means that their body is cannibalizing on the muscles and vital organs. You see it when you look a children that do not get enough food. They look apathetic and retarded. When they are not supported now they are damned to a life of misery.

So this is something that will change peoples live and gives them a new start.

-A second thing- that they are doing is that as soon as there is a natural disaster (which unfortunately happens a lot in the Philippines) they are the first to get to the rescue.

When governments are still declaring emergency levels and deciding which major will get to buy a pig farm from foreign aid, they are already “down in the trenches”. They mobilize dozens of volunteers and start working the next day.

I am not a proponent of government foreign aid (“foreign aid is the distribution of money from poor people in rich countries, to rich people in poor countries” Doug Casey).

This organization would get The Global Citizen seal of approval. The only problem with that is, that it is completely meaningless.

So here is what they could use:

– Volunteers to help the feeding projects (if you are in Cebu, be sure to be in touch).

– Foreign contact persons. Filipinos are aware that their government are useless. So they are much more likely to support good causes directly (and dodge taxes). But their purchasing power is often limited. At least much lower than in the West where people donate thousands to organization with dubious political motives, expensive managers and 90% overhead. If you have any ideas to give a Western front to an organization that is “sleeves up” directly helping in the Philippines, that would make you the equivalent of an angel.

-Goods that can be redistributed. Like food that is almost out of date or clothes or whatever.

– Some flowers for Jilly for her selfless work.

…Hej, I am just brainstorming here!

I don’t know if putting this message out there is going to help.

…But not sending it for sure won’t…

So let me know if you want to get involved and I will put you in touch.

Or just get of your lazy ass and click on the following link:

Robbi Sapinggi was a mountain guide in Malaysia. He took me up Mt. Kinabalu last year in a private tour. He was very kind and friendly. He endured my reckless running up the mountain (I always want to get it over with). But he also was patient enough to support me on the way down when my knees slowed me down to a grandpa pace.

Always a smile on his face, even when we were freezing after arriving on the summit way to early because “I do not want to miss the sunrise”.

These guys have a tough outdoor life. They take people up the mountain I would not even take on a walk through Central Park. And they do it with joy and pride.

That is why I was -shocked- to see his name as one of the first confirmed deaths in an article about the earthquake on Mt. Kinabalu last week.

That earthquake washed away the route to the summit. And with it the climbers on it. A lot of the climbers are young backpackers. Many couples. Imagine the desperation.

It was the local guides that selflessly did everything in their power and got the surviving climbers safely down.

Robbi was hit in the head by the rocks. He was bleeding severely. But instead of worrying about himself he directed his guests to safety and stayed behind to support other climbers and to wait for help. It never came and he passed away…

The news about his selfless behaviour spread quickly. The internet has embraced him and a fund raiser has been started to support the family he left behind.

It is a sad story, but at least he died doing what he liked and will he forever be remembered as the hero of Mt. Kinabalu.

…Let his spirit guide future climbers on the mountain…

P.s. Next week we will get back to taxes. I will explore ways to deal with the mandatory tax on digital products in the EU.