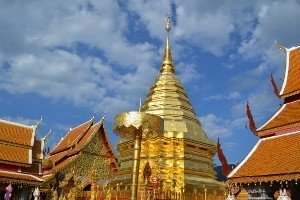 Did you notice the awkward long silence?

I just returned from a Buddhist Vipassana here in Thailand.

That’s right, I have been completely zennnnnnn on top of a mountain in one of the most beautiful temples in Thailand. It is called Doi Sutthep.

I can recommend it to everybody.

It is probably impossible to describe exactly what it is like. Because everybody experiences it differently.

…But I’ll give it a go anyway…

You go to a retreat like this to simply get away from it all. There are no cell phones and no connections to all the quick information of our “modern” society.

In its essence it teaches you how to become emotionally immune for all that is happening in the world.

In any case, whether you worry about it or not, those things are out of your control. So you might as well stop worrying about them.

And when you stop bothering you create a silence in your head. And this leaves room for a lot of other good stuff. Happiness, creativity, solutions to challenges you have been dealing with.

That does not sound to strange so far, right?

You might not fully realize it, but you’re mind is an orchestra of noise with new thoughts popping up like fireworks on new years eve.

“Will people like my profile picture?”
“Will I still have work by the end of the year?”
“I think she hates me”
“Remember that time I made a complete fool out of myself”
“Mexican food”
“I am glad that insect is not the size of a horse”
“Did I wipe my fingerprints of that machine gun?”

Your mind is occupied with this nonsense. And this prevents you from doing important stuff.

So much for the theory.

Thailand Vipassana – Here Is The Practice:

It means that you have to sit still an not think about anything.

This is not easy.

Now, I have done it before. The first time was in 2008. And I remember then I had a lot of questions about life.

“Keep youl mind calm, and the answels will come to you”.

“What kind of teacher is this?”

But I got it after three days. And those three days changed my life. I had friends asking me how it comes I take misfortunes without getting upset. It is because of what I learned those days (and a lot of missed expectations during my travels).

But a lot of people there are stressed. You can see it in their faces.

I actually did not want to spend time in the communal room, because a lot of the people look so frustrated. It is actually difficult for them just to be alone with their own mind.

Very strange, if you think about it, isn’t it?

A lot of the people there have something to solve. This makes sense. If you are an extremely happy person on top of your game you might not get the idea.

I have known some yoga teachers and practitioners and to be honest they were not the calm and relax people you would expect. They started with yoga to BECOME calm and relax.

For me it went really easy from the start. Especially the first day I had a big smile on my face. After a few days I had problems with concentrating because my mind started pumping out ideas at such an alarming rate I feared my brain would pop.

But I also got answers.

Here are some other things I discovered:

I cancelled negative newsletter subscriptions, deleted people from social media that just complain and post about violence and I am not checking news sites any more.

Instead, I am studying and reading books. Or that is the plan. So far so good.

Haven’t you ever noticed that some things or people always give you a negative feeling?

Back to the temple…

Sometimes, the atmosphere became a bit to serious for me.

All those people in white walking around as if there were curing AIDS.

You don’t talk to each other. But you see that people are trying to figure each other out. My mind also got carried away.

There was an Asian girl that arrived together with me. She had two hair braids. Like a German milk maid. I imagined here with Lederhosen.

Sometimes I would imagine that I would sneak into the meditation room with a pile of those aluminium prison style food plates, smash them on the ground behind someone sitting in front of a Buddha statue and scream “MINDFULNESS!!!”

I would then be sitting alone laughing. Some might have thought that I am a bit weird. HA!

There was one guy that specifically broke the silence with me to tell me that during one of his meditations he became so euphoric, it was as if he had used MDMA.

I found it interesting he assumed I am the one guy that would know how that feels.

I didn’t really, but I thought it sounded cool that he could get to such a state by sitting still.

(I just looked at Wikipedia, and it is just XTC. I have done that in my youth a couple of times. The first time I did that on a rave I walked hand in hand with a really fat girl while wearing sunglasses and telling everybody I loved them. I wonder if he also did THAT…)

Buddhism makes a LOT of sense to me. Only one thing I do not get. They are teaching to come closer to yourself. Yet, all the Thai people there come to pray to Buddha.

But Buddha was just a man. They are doing the exact opposite of his teachings. They are looking for answers outside of themselves.

Interesting insight in how people create religions and traditions. I guess it is easier to light a candle than actually DO something.

But let me repeat: I think this is can be VERY beneficial for anybody.

Especially if you are an entrepreneur it can be a great thing to take a moment to get back to yourself and be sure to be reminded what it is you are all doing it for.

And I think I will do it again.

You can do it in a lot of places in Thailand and it is free. You can make a donation but you do not have to (I suggest you do).

You can stay up to 21 days. Other temples have different arrangements.

The one I visited is this: