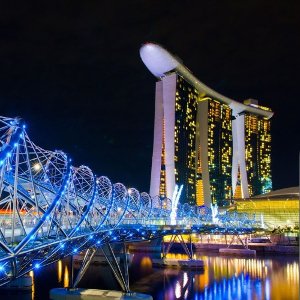 I had a tiring weekend in Singapore.

I went dancing with a former Ms Singapore and spend a day in the new area of Marina Bay.

I had to go there to do a visa run. Indonesia only allows you to stay a total of 2 months. Then you have to leave.

Most people fly to Singapore or “KL”.

It is pretty absurd if you think about it. Spending all this money, time and plane fuel for some arbitrary paper fiction.

I met her once at a festival in India.

A very spontaneous and smoking hot girl from Singapore. We ended up talking everyday and dancing the night away. Although, she always left the party early.

After the long weekend she gave me her email.

I looked her up and started seeing pictures of beauty pageants and pictures of her with all sorts of crowns on her head. And an ambitious professional life. A fine and interesting women indeed.

I also found out that she was not a Miss, but a Mrs…

Anyway, we are still just friends and we went for a drink and a dance. It was a nice evening.

Then I walked my friend home as a -true gentleman- and went on to the main night-life area: Clarke Quay.

There I faded into obscurity.

The only noteworthy was some other married women that wanted to dance with me (what is wrong with me) the 20 Dollar beer’s I was drinking.

I think my glory days are -well- behind me.

It is interesting how one’s perception changes by their surroundings. When I moved to Philippines from Dubai I thought the place was a real dump and could not adjust for a week. When I visit Singapore from Bali I thought everything looked nice and organized. And WAY overpriced.

Talking about being organized:

I noticed that Singapore is really a nanny state.

Everywhere there are signs telling you how to think and how to behave.

“If you see suspicious people, report them to the staff”

“be careful for viral deceases. Viral diseases are dangerous”

“Always make sure your child is tight into their seat”

Be careful here. Don’t step here. Behave. Don’t do that. Don’t think for yourself.

It is interesting that there are no countries that embrace REAL FREEDOM. Some places like Singapore have economic freedom. Others have cultural freedom. Others just have a form of anarchy combined with clueless and corrupt politicians kept together by family values.

In other countries the whole societal structure just sucks all together but there are hot women.

But there is no real freedom in this world if you always stick within the arbitrary lines that were drawn on the globe by greying psychopaths, called borders.

You have to move.

The next day I visited the new Marina Bays area. This is a huge area with that famous building with three pillars and an infinity pool on top that everybody is putting on their bucket-list.

But the whole area has been one big development with a lot of gardens and futuristic attractions.

It will be a long time before in the West anything of this scale will be build again.

Particularly “interesting” I found the shopping mall. It is huge. And it is exclusive.

Every self respecting brand is represented.

There are fancy places you can eat. People queue up to sit next to a waterway where people take a gondola trip of 100 meters back and forth.

And everybody is connected. Taking selfies and texting. I even saw a women playing a stupid video game when walking through the mall. Not even looking where she was going.

I walked into the food court next to the ice-skating ring. I absolutely hate food courts.

The place was loaded with people stuffing themselves with unhealthy crap. I was hungry but I felt like in a scene in from Dusk Till Dawn.

Before long, a special door would open and a roast stuffed immigrant baby would be served with an Apple I-Phone in its mouth.

Everybody would scream in blood-lust and with fiery eyes they would jump the desperate waiter and the body parts would be flying through the air.

It is not real…

I have never really understood materialism. I always say that people that identify themselves with material objects try to make up for a lack of identity.

But Asians take it to another level. They follow all the latest trends. Whether it is a gadget or cultural.

One could argue that in Asian cultures there is little individuality. So maybe people use materialism to somehow follow their natural tendency to distinguish themselves by getting the latest gadget. Somewhat like in Cuba people use race to determine their status.

Do you want to hear a funny anecdote?

My Chinese trader friend said that in her home town there was a HUGE economic boom.

The farmers there all became rich when their farms turned into factories. Not knowing to do with their money, some of them heard that rich people buy Luis Vutton (whatever) bags.

Suddenly, all these farmers would walk around in their normal farmers outfit, but carrying Louis Vuitton (yeah, that’s how to write it) bags and expensive watches.

Must have been a funny sight.

It was interesting. I also visited the botanical garden. Which was much more peaceful for my ageing soul.

It was also freaking hot and humid.

And it is nice to travel with just a small back pack.

And now I am back.

Julius
To Old For Baby Sitters