The Verdict: Living in The Philippines as a Digital Nomad

The Verdict: Living in The Philippines as a Digital Nomad 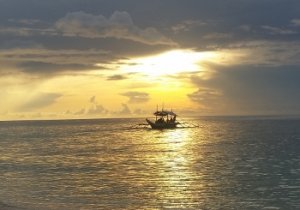 I have left Cebu and the Philippines after 5 months. I moved to Bali.

Here you will get the pro’s and con’s about living in the Philippines as a digital nomad.

It has very good things to offer to digital nomads. As you will see.

But first let me tell you why I chose the Philippines to start my life as digital nomad in the first place.

I wanted a soft landing the first months as a digital nomad. This was on the top of my list:

1. I wanted a place to easily blend in. I just wanted to limit the cultural and language barrier so that I could focus on work.

2. Have comfortable places to work with decent Internet.

…And of course I like to travel around and see nice things. But that is no problem in the Philippines.

Did I succeed? Yes, sir!

I had a wonderful time. A little bit to good, on which later more…

But let me address the points one by one:

The Philippines is in my humble (but accurate) opinion the most welcoming place in Asia. And possibly the world!

Filipinos are very friendly. Being invited in someone’s house or to a barbecue is very common.

Compare that to a number of Western countries were ex-pats hang out together because they find it hard to mingle.

Filipinos are easy to understand. I think the main reason is that the Philippines has a Christian history. They also have been under the influence of different regimes. This has created a relatively neutral culture without to much sharp edges.

Almost everybody speaks English. I knew that. There are a lot of different languages in the Philippines. It is easier for everybody to speak in English. Commercials, music, legal contracts, a lot is being done English.

I am reminded in Bali how important this is. Here you cannot have a normal conversation with the average person. Including surf instructors and people in the tourist industry.

Internet in the Philippines is decent, but there are hiccups.

The best places are the restaurants where you buy something to eat and use the Internet.

All in all it is doable.

Renting something decent in the Philippines can take some work to find. It is actually not as cheap as places like Thailand and Indonesia.

I paid more for my room in the Philippines more than then one I had in the Netherlands. Go figure.

Yes, if you are willing to live out of the city you will be able to find good deals. Or in an unguarded place down-town. This might not be the best idea. As I will touch on later.

When you want to eat decent food, you need to go to the better places. And then, the cost of food is higher than other places in Asia.

The difference between three 2 Euro meals (1 Euro her in Bali) and 6 Euro meals is 360 Euro per month. This might be to much for price conscious digital nomads.

Other points of interest?

If you get into the Philippines you will get a one month visa. You can extend that up to 16 months. You do not have to leave the country.

However, you will have to get to the immigration office to extend your visas (or hire someone to do it for you). You will also need to have an identity card made. And to give off finger prints.

What is that even for? Like they have the resources to take fingerprints on crime scenes.

Remember, if you have stayed there for over 6 months, you need to get an exit permit before you are able to leave.

One thing that is great about the Philippines (it is not the only place) that as a foreigner you can live without paying income taxes.

Instead of repeating myself, just read my previous explanation: How to live tax free in the Philippines as a foreigner.

With all the islands there is a LOT to do in the Philippines. Tropical islands, shark-diving, parties, road tripping, waterfalls, strange landscapes.

This will probably the main reason why you would want to travel to the Philippines. The most amazing sights are a boat or a bus ride away.

I saw quite some of it. Read about it here: Exotic Road Trip Cebu & Island Hopping Philippines.

But I will definitely be back to visit some of the major highlights I missed this trip.

One thing you do not have to come to the Philippines for is food.

I think that part of being an entrepreneur or freelancer is to take care of yourself. ESPECIALLY when you are travelling and have irregular rhythm you can use all the nutritional support you need. You are what you eat. And stuffing yourself with sweeteners, sugars and preservatives is NOT the way to go.

And that is what you will get in the Philippines. Healthy eating is not high on the agenda. There are definitely good restaurants around and in some of the better places you will be able to get a salad or some fruit. But most places it is mainly fast food, rice and meat. A lot is deep-fried and filled with preservatives.

When I arrived in the Philippines I could not stop eating the pork. It was tender and sweet. Unlike anything I ever tasted before. After eating it for a couple of days I woke up and felt like I swallowed a football. I was hooked and cured from the adjectives in a couple of days.

When in Dubai I told that I would go to the Philippines to a Filipino they said the same: be very careful. Some told me not to go. They told me crime is on the rise and even rampant in the best neighbourhoods of Manila.

I do not think it is that bad. Not at all. Especially compared to Latin America.

I have not felt unsafe. Even when walking alone in the cities at night.

But you definitely should take precautions. I have heard a lot of horror stories. Tourists being mucked and stabbed at home. A women shot in the head in a taxi and THEN robbed. And a German guy who walked into a Mc Donalds at night where two foreigners had beef with a local posse that shot them all up including the German because he “looked foreign”. That story stuck with me…

I mean, there is a reason why even a candy store has an armed guard, right?

What do you think?

An exception to the rule is Davao. They have some sort of John Wayne kind of mayor who rules with an Iron fist. The people love him. But his methods would probably be slightly frowned upon in the West.

…Criminals are executed on the spot by a death squat…

Another thing you should notice is that Filipinos can be nationalistic and short fused. Criticising Filipinos in public is not a good idea. While in the Netherlands a remark about the kitchen will likely be laughed off, in the Philippines it will be taken personal.

Don’t show your wealth and mind your own business. And you will do just fine.

The night life was not as nice as the first time I was here.

It has taken two directions.

One is where the nouveau rich spend time -and act pretentious- in super clubs and listen to insane hard house music that was popular in the Netherlands 15 years ago.

An even in the best club in Cebu I was bothered by ladyboys, gays, prostitutes and everything in between. All the people I am NOT interested in.

But I am probably just turning into a boring old geezer. Who knows?

Having said that, there are enough bars, karaoke clubs and parties to enjoy yourself.

You can make friends easily and Filipinos have the ability to make a party out of every occasion. So you definitely will NOT be bored.

Living In The Philippines Is Nice – Why Did I Leave?

You must thinking, it looks like a nice place. Why did you leave?

Well the decision was made when I realized that I was not getting anything done. Travelling around the islands. A weekly routine and social life that started to take more and more of my time.

It was all I could ever hope for, but it is an illusion that I will be able to keep myself alive with months with 5 working days.

So I decided to go to Bali, to learn to surf. And some very interesting things I will reveal later.

…I did not fly directly…

I had a stay over in Manila where I ended up with a night out of a rugby club in a “girlie bar” in the red-light district (don’t ask). What a bunch of nutcases. One guy was completely wasted and bumped into everybody, tearing up his shirt and sliding upside down from the strip pole. Before long he pushed his slipper in the face of a soldier who was there with his buddies.

It turned unpleasant and a lot of very big guys started pushing and pulling in a testosterone filled brawl.

I looked at it from a distance “what the hell am I doing here”.

On the way home I did pass by a bar with probably the most appropriate name ever: “Plan B”.

In Kuala Lumpur I stayed in China Town. A big market place with food stalls.

The first night I went to a great salsa night.

The next day I went sight seeing with a Spanish friend of mine I know from Dubai and his Moroccan wife. He is a Bitcoin trader by profession. The guy buys and sells Bitcoin (on margin) based on the news. You ever heard about that?

Don’t tell anybody, but Bitcoin is far from dead. Thousands and thousands of people around the world are full time working on a parallel financial system that one day might be the answer to the corrupt and criminal system we have now.

A man can dream, right?