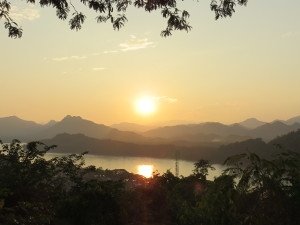 One of the little grievances of the digital nomad lifestyle – in South East Asia – is the need for via runs.

In some cases, you have to leave the country to come back in. A completely physical exercise for a paper problem, don’t you agree?

I like to combine “business” with pleasure so I figured I might as well travel a week during my in Laos Visa Run. Why not…

So I took the plane from Chiang Mai and headed to Udon Thani, a city near the border with Laos.

A woman of a travel organisation figured she could make some extra cash.

She had an older Australian who had booked a private visa run. I could hitch a ride to the embassy in their minivan, for the same price of a tuc tuc.

Now, the funny thing was that the guy that picked me up did not know that I was just their for the transfer. He thought that I was one of the tour operator’s clients.

Now, I kept my mouth shut during all of this. But in the end I did put the cash amount of what his effort was worth to me in his hand. These people have enough on their minds with tourists trying to get the most of them, as we will discuss in minute.

So I stayed a night in the capital Vientiane.

In the evening, I walked to the boulevard to watch the sunset on the Mekong river. People come there to chill out and exercise.

There were also a lot of activities going on a little market with a fun fare.

I observed a barely eighteen year old rich kid double parking her car on the road and spending a months salary to get a plushy dog, throwing darts with one hand and filming it with her Iphone with the other, while the road slowly congested behind her.

I loved this as a kid. I was watching first, but I just had to go.

The funny thing is that here everybody is carefully avoiding each other.

I am having none of that.

I made sure I had enough speed and threw my weight in it, given these kids a good “shake up”.

At first, you will get some surprised/disturbed looks. But not much later everybody was bumping away. With the tall white guy of course being the price target. It was fun!

I had dinner in a French café. Since Laos used to be a French colony, you can still see the influence.

Next day I went to Vang Vienne.

The story goes that the infamous tubing was banned, but I spotted a lot of completely wasted backpackers floating down the river amidst the lush landscape. Stopping at bars to get liquored up, and going further downstream, to the next bar.

I rented a bike and rode around.

I took a bus to Luang Prabang. The view on the road is absolutely stunning. This is a very nice historical town, with nice temples and awesome things to do in the surrounding area.

I enjoyed the food, a nice river view from the balcony, and the great sunset from a the central temple mountain.
The final part of my trip was one of the main things I came for to Laos:

The slow boat on the Mekong River. Upstream. I had heard a lot about it and had to try…

Since most people go form Thailand to Laos, the boat from Laos to Thailand is not so busy.

It was a pretty easy going trip. Two days on the boat for 9 hours. I was on the boat with a group of backpackers, a Thai musician with traditional clothes and a friendly young Lao monk who likes German rap (no kidding). We played games, sang songs.

The scenery was great, but a bit monotonous. Groups of children playing on the river banks. I even saw an elephant!

At the end of day two, we crossed the border into Thailand.

And I made an interesting observation.

On the boat I teamed up with a group of budget backpackers. They were really focussed on the penny. We tried to get the best price everywhere.

There is of course nothing wrong with that (I have done it for years). But we were constantly having discussions with the locals.

And you see that often, groups of travellers that move through the country that are very sceptical towards the locals and think they are being scammed everywhere. A negative attitude that is mirrored by the locals, thus becoming a self for-filling prophecy.

You want an example?

We took a van to the town. I asked the price for the entire van. It was X. We were with 6. Then two others joined. Upon arrival the price was X + 33%. Endless discussions followed. For nothing. They just have a fixed fee per person. More people = higher fee. That is just it (and it was not a lot of money).

I usually try just to pay what I think it is worth, but discussions about a Euro are just a waste of my time. I might overpay slightly on occasions, but most of the time I get fair prices and I just as often end up singing and socializing with the drivers.

…And then I made an unpleasant discovery…

The Thai border police had stamped my passport for normal 15 days entry. They missed my tourist visa completely (even though I specifically filled it in on my entry card).

Can you imagine? I spend all this money, two days at the Thai embassy and then I just get 15 days (instead of 2+1 month). Damn it.

I had to get to get back to the border.

But not after I had taken over the sound system of a Thai bar and played Dutch folk, Irish drinking songs and Frank Sinatra (in no particular order). Singing out loud with the Thai owners who were completely wasted.

Luckily, the same guy is present. A senior and grumpy men. He remembers me (I had been very polite).

“You did not fill in your tourist visa number on your application.”

“Yes, I did. I still even remember the fist five digits…”.

“No, you did not do it and then I don’t know you have a tourist visa”

“Yeah, I am sorry. Must have been tired after the boat. I am sorry”

You see, I remembered a chapter from the book “How to win friends and influence people”. I had been reading this. It explained how little use it is to always be right, when with the same energy you can have the other person save face.

Saving face, in Thailand is of course VERY important.

So he made some more comments, I played along with the little game. He fixed the error, and I went on my way.

– Check the stamps yourself, border police officers make mistakes.
– Just take the blame and get on with things that are more important.

Great country. A bit of a shame that I rushed through it. There are a lot of nice things to see. I could easily spend a month travelling there and not be bored.