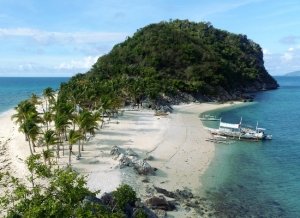 Did you notice anything strange?

Not as if there is no internet here in the Philippines. There is mobile internet everywhere.

Except in the most remote of islands.

And it is exactly where I dived head first on a rock. Arguably the stupidest thing I have ever done (there are others).

But I am getting ahead of myself.

What was I going on about?

I just do not bring ANY gadget when I travel nowadays.

Just a 7 USD phone that no one ever calls and a camera.

And that is -very- relax…

You want to hear about the trip? I’ll be brief.

It started quite relax with a beach and party holiday in Boracay.

Boracay is a tropical island with an amazing long white beach.

Then it still had a very romantic vibe to it. Especially at night when the brightest moon ever shone upon the beach through gently waving palm trees.

By now that has been completely developed. Condos, bars, restaurants, banana boats, selfie-taking Asian teens. Most of it I do not recognise.

May is the Philippine summer. And the place is packed.

It is enjoyable, but reminds me of the beach holidays I used to go in the south of Europe.

…When I was a teenager…

After that we go to the much lesser known islands of giants. We had to take three different busses / mini vans and stay in a motel to get the only boat going there once a day.

These islands are still very basic and have seen little development.

We sleep in a shack.

The next day we go island hopping. Ever done that?

The first island is a small island with a sandbank with ocean on both sites that completely floods during high tide.

The second island is the little paradise you see on the picture.

The third island has a coral reef where we snorkel in between narrow passages.

After that we go through a passage in the high sea-side cliff that leads to a small pristine green and blue lagoon.

It is a wonderful place.

This lagoon is so wonderful, that I decide to do a back flip.

(you see where this is going, don’t you?)

But man, I do not jump back far enough. I make the turn but my upper body is still curled up when I land and I face-plant right onto a rock!

My friend looks on in terror and expects me to be unconscious.

But I surface only to see the beautiful lagoon turn red around me. Blood is spewing out the side of my nose.

Luckily, my friend is a nurse.

She assesses the situation.

She thinks I need stitches. But there is no hospital here. There is not a decent hospital within 5 hours travel distance.

She checks if I am not more badly hurt. I could have easily broken my eyeball or lost all my teeth. But “luckily”, my arm has absorbed most of the impact.

I have a number of cuts on my right upper arm. It looks like it went on a date with a cheese scraper. It will heal though. And according to her, will leave a “bad-ass scar”.

Which is a good thing?

Even crazier is that we filmed it with a go pro. It is even more painful to watch then it actually was. It will surely be on the top of every May fail compilation.

But it won’t, because I deleted it.

Anyway, we manage to stop the bleeding with the medical kit we have. I get taken well care of the rest of the trip and I can inform you that it is healing very well. It was not to bad after all.

I have been very lucky.

And now my girl has realized that “sometimes I am very smart, and sometimes very stupid”.

The next day we make it to Guimaras. This is the Mango capital of the Philippines. There is even a mango festival in the making. There is mango ketchup and mango pizzas.

But not much else.

So the next day we take a tricycle.

This particular tricycle driver has a huge sound system. And WE have a telephone with Spotify. So it does not take me long to combine the two and now the killer hits of the German homosexual albino schlager singer Heino are blasting over the Filipino country site.

The arrival of the only white guy on the island clapping and singing like a goose stepping German at Oktoberfest at the “port” (a few bamboo shacks) was welcomed by a lot of surprised faces, I have to say…

And will be talked about for centuries.

What we do in Negros, the next island?

Oh, not that much. We only visit the ruin of the house of a 19th century plantation owner. It is promoted as the “Taj Mahal of the Philippines”. And although it has a well kept garden we tent to consider the comparison a little enthusiastic…

We also miss the boot back to Cebu and have to stay in a sleazy motel that trembles with house music of a nearby club all through the night and the moans of the neighbours.
I am glad to be back in Cebu.

It has been a tiring trip. Especially giving that the minivans, tricycles and boats don’t seem to be made for people larger than 1.2 meter.

But is was an amazing trip. We had a lot of fun and saw amazing things.

One of my observations is that the Philippines are developing.

And whenever there is a place that is remote and awesome someone goes there, takes a couple of selfies that go viral in this social media crazy country and next thing you know there is a resort, jetskis and groups of kids from Manila drinking rum and playing house music.

On beaches where a year ago was nothing they now have a bar, accommodation (they use tents given by NGOs after hurricanes for this) and people dreaming of renting out banana boats.

So if you want to see raw beauty it still can be found here. But you have to be quick.

Before it has become a second Thailand (my guess is that it will).

But whatever you do, don’t face dive into rocks in the middle of nowhere.

That is only for REALLY stupid people.

Have a good day.

Go here if you want to become a tax free global citizen and travel like this (without the face-planting).